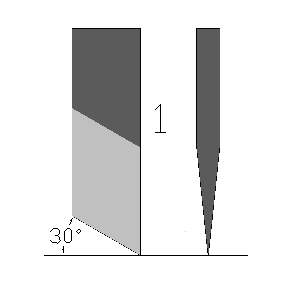 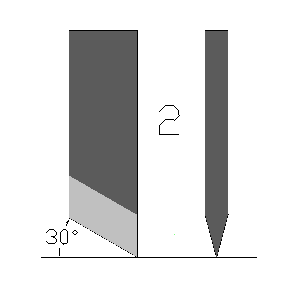 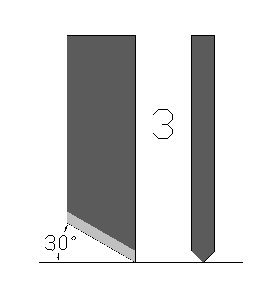 The illustrations above show how a blade can be made using just three of the infinite number of angle compounds that could be used to create a particular approach angle, in the examples shown we have used 30 degrees but it applies to all angles.
1/ Is far too fragile for practical use and the point will break or chip very easily.
2/ Is a more realistic configuration - (for some materials on some plotters)
3/ Might cut butter but it would be useless for almost everything else.
BUT THEY COULD ALL BE DESCRIBED AS 30 DEGREE BLADES
So when you ask for a 30 degree (or any other angle) blade which configuration do you want?
Don’t worry - we can easily establish what you need.
QUESTIONS
Would you expect all cars to use the same tyres?
Or the same wheels as a roman chariot?
Of course you wouldn’t - and they don’t - because they are different.
So why would entirely different plotters which work in entirely different ways use the same blade angle/configuration? -THEY DON'T
And why would just three blade types (30, 45 or 60 degrees) suit all machines? -THEY DON'T
FACTS - Yes - boring facts.
Different plotter types can have entirely different cutting characteristics.
And they need entirely different blade configurations.
For each plotter type we configure blades for particular media ranges.
And there is much more to that than just one angle.
IF YOU WANT THE CORRECT BLADE FOR YOUR PLOTTER
Please don't use meaningless and out of date descriptions.
Just tell us the make and model of your plotter and the materials you cut.
Why the descriptions 30 45 and 60 degrees became so common?
Most modern plotters now used the in UK are drag cutters.
When those descriptions became common most plotters in UK were tangential cutters which worked very differently.
There were very few machine types in the UK and very few blade types available so simplistic descriptions became common.
THIRTY YEARS AGO - BUT NOT NOW
30 degrees described a blade type usually used for “normal” vinyls.
45 degrees described a blade type usually used for some thicker materials.
60 degrees described a blade type usually used for some thick (but soft) sandblast materials.
These descriptions applied to blades for one particular machine which was common in the UK over 30 years ago.
Those old descriptions still persist, but although they may be described as such, blades now supplied are rarely made to those old configurations because blade design has progressed to become more suited to modern machines and materials.
Sooner or later people who don’t know which angle they are talking about and are unlikely to have, or be able to use, instruments to measure it, will stop using meaningless descriptions that were already out of date before they were born.
Next time somebody describes a blade as 30 or 45 or 60 Degrees ask them “which angle?”
The answer will probably be “THE angle” - ask again “which angle?” - the answer will be the same.
People who describe blades by “THE angle” rarely know to which angle they refer (a blade has several relevant angles).
If they think they know which angle they are quoting they rarely know whether it is expressed from vertical or horizontal.
(30 degrees from horizontal is 60 degrees from vertical)
So why do people still use these descriptions?
Because they are a persistent legacy of an era when plotters and materials were very different and the design of plotter blades was largely guesswork.
When plotters first became popular the range of materials they were used to cut was limited so somebody somewhere made a blade for a particular machine.
The configuration of that blade (which had many angles) became known as a 30 Degree blade because ONE of the angles was 30 degrees. (It could have been many other angles but 30 degrees was convenient for manufacturing)
As plotters became more popular a wider range of materials developed and some of those were thicker so somebody made a blade to cut them.
Once again an angle convenient for manufacturing was chosen and the 45 degree blade was born.
(another convenient angle for manufacturing)
Further material developments put more demands of the limited power of machines and gave rise to the production of a 60 degree blade (yet another convenient angle for manufacturing)
Do these blade angles still apply 30+ years later?
Sometimes, but only when the correct compound of angles have been used to create them.
As you can see in the illustrations above the other angles in that compound can be more important than “THE angle” so unless you are a metallurgist, a toolmaker and a mathematician who can calculate and specify ALL the angles in the compound needed to create the cutting edge of a blade it is much better to tell us what plotter you have and what materials you cut rather than to provide a meaningless, inadequate, inaccurate (and ancient) description.
Back to content